Published on November 28, 2012 by kievaptadmin 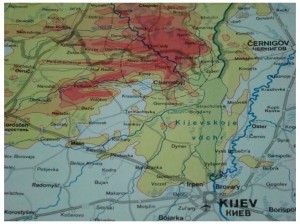 The Chornobyl Museum was opened on April 26, 1992, exactly 6 years after the disaster happened. It tells the history of what happened through photos, clothes and equipment used by the rescue workers, a model of the nuclear plant as it looked before the explosion, videos and tapes. It is an arresting experience.

One of the main photos shows a helicopter that was pouring out water or some kind of powder to cease the fire at the reactor. When it passed over the reactor the tail was shrinkled and the helicopter turned upside down before crashing. The faces shows the staff (four of them) on the helicopter. This scene was very touching and I had to watch it a few times.

During your visit, there also may be an exhibition about the Fukushima disaster in 2011.